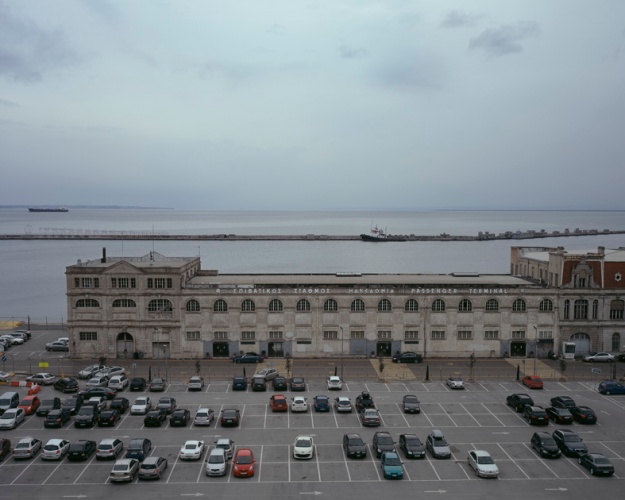 Sea wall, port of Thessaloniki. Here, the Turkish battleship, the Fethi Bulent, lies three fathoms under water. The warship sank after it was torpedoed by the Greek torpedo boat T-11 on 18 October 1912. Thirteen Ottoman sailors and the ship’s imam lost their lives in the attack. The iron-clad still lies where it sank, under three fathoms of water, beside the sea wall three hundred meters out to sea. It rests on its port side with its prow pointing towards the White Tower. Some of its moveable parts were salvaged in 1999, along with the remains of the Turkish crew (note: textual research by Sakis Serefas).

In Souvenir de Salonique, Paris Petridis, in viewing the city as a palimpsest, reveals the sites of violence that lay buried away from the public gaze that speak of the many dark chapters that blighted the end of the Ottoman empire due mainly to the rise of nationalism. The deadpan photographic style creates a stark contrast with the extreme violence recounted in the captions and underscores the many ethnic groups that co-habited in this city. By making visible the sites of violence, this series helps to counteracts the erasure that have beset the many transformations of Thessaloniki (Salonika) and to generate post-memories of its history of violence, diaspora and displacements.

Storeroom, Great School of the Nation, 2006

In the Rum-Orthodox Schools of Istanbul, Paris Petridis allude to an important chapter of displacement and diaspora of the Ottoman Empire. The scale and austere magnificence of these institutions, built in the late 19th century, are potent signifiers of the huge Greek community that once lived in this Ottoman city but now lay as silent witnesses to a past rich with transcultural exchanges. The colour photographs of the many classrooms and spaces, now eerie in their emptiness, are redolent of the high aspirations embodied in these educational institutions but for which, the many teaching instruments and aids such as the telescope, globe and blackboard have remained devoid of any equation of learning.

This series highlights a significant transcultural legacy and these schools are among many reminders of the sites of learning that made up the rich cosmopolitan mosaics of the Ottoman city and indicate the fluid exchanges between the Eastern and Western components of the Empire. Furthermore, networks of religious schools catering to numerous Muslim, Christian and Jewish communities were founded across the Ottoman empire from Sarajevo to Alexandria plus many important universities. This series is one example that help to challenge Orientalist romanticized assumptions of Ottoman Empire as being static and stuck in an ancient biblical past and presents another example of an artist’s work that seeks to reactivate a neglected cultural and social heritage of the Middle-East.

Biography: Paris Petridis is an artist living in Salonica, Greece. He is a lecturer at the Applied Arts Studies College and has exhibited widely including the Greek State Museum of Contemporary Art, Mois de la Photo in Paris, Istanbul Modern and Multimedia Art Museum in Moscow. He is author of numerous books including Notes at the Edge of the Road, The Rum-Orthodox Schools of Istanbul and Here: Sites of Violence in Thessaloniki. His work is included in many private and public international collections.